by Alewa House, published 11 months ago

The impact of social media on the music industry in Nigeria is so evident. The likes of Facebook, Instagram, Snapchat and Twitter are arguably on the forefront of this evolution. How did we arrive here? You may want to ask. Well, these social media platforms have given artists the platforms to reach out directly to their teeming fans, intimate them with their(artistes) latest projects which includes album launch, collaborations, shows, guest appearances, promotions, and even award nominations. To a very large extent, a musician’s fanbase and reach can now be assessed using his/her followership on any of the social media handles. Of all these social media platforms, Twitter seems to stand out, being the most preferred( of course arguably) social media platform of celebrities especially musicians.

Twitter has over 39 million estimated users in Nigeria; majority of whom are made up of mostly university graduates, a greater percentage of the middle class, the tech savvy populace, and most importantly, 90% youths. Most celebrities in Nigeria fall into this category hence, they’re quite active on Twitter and have a cult-like dedicated community of followers on twitter. Community of followers like WizkidFC, 30BG, OdogwuFC are well known in the Nigerian Twitter space. Twitter has given them a platform to tweet at their favorites, comment on their tweets, like their tweets, share their tweets, or chat with them directly. However, on June 5, 2021, the Nigerian Twitter community woke up to the shocking news flash! The federal government of Nigeria was said to have suspended the operations of Twitter in the country sighting sundry reasons. Though the ban was lifted 222 days later, after a fruitful negotiation between the twitter management and the federal government of Nigeria, many experts have come out to analyse the extent of the damage the ban did on Nigeria’s economy as a whole. Netblocks Cost of Shutdown Tools, which uses the classic Free Digital App GDP impact technique estimated that Nigeria’s economy lost $250,600 every hour due to the Twitter ban. The A4AI (Alliance For Affordable Internet) Nigeria on the other hand said the Twitter ban created a loss of $1.2billion for Nigeria’s economy.

Nigerian Music remains one of the biggest exports of Nigeria in recent times. Therefore, In this article, we at Alewa House examine the impact of the Twitter ban on the average Nigerian musician who uses the platform to create and promote his/her contents, as well as engage followers, fans and partners alike. It is not a hidden fact that musicians in Nigeria, just like their counter-pacts in other parts of the world, have been using twitter as an avenue for self-branding, music promotions, campaigns and engagements. Much of their digital products, endorsements, streaming links, and links for buying their show tickets are also promoted or made public via their Twitter handles. Therefore, it is safe to say that much of their revenues, too, come directly or indirectly via Twitter. Twitter was doing an estimated N7 Billion in revenues monthly for its Nigerian Tweeps - mostly Tech Start-ups, SMEs, value vendors, digital marketers, e-commerce platforms, other content creators such as musicians. Twitter has been proven to be a platform that helps musicians grow their brands and fanbase. It gives musicians an opportunity to run most of their PR by themselves which translates to lesser expenses but yet, wider reach to a global audience. The use of hashtags and high trends generated through retweets, likes and shares have been able to draw global attention to most Nigerian musicians and their music through Twitter. Voting for award nominations for both local and international awards by their fan base was made easier; thanks to Twitter. Hence, the ban on Twitter was a blow to the free flow of these interrelated activities made possible by Twitter.

Twitter, being a micro-blogging social media site, has a personal feel. It gives an artist a form of connection to his followers. Every tweet matters, whether a cryptic tweet or a straightforward one, it is received by the targeted audience. Twitter seems to be the most potent avenue these musicians pass their raw messages without the usual PR tweaks and twists. And that is why their fans follow them religiously on their handles to get their undiluted thoughts, get updates on their latest music and buy them, buy memorabilia associated with them, buy products they promote including fashion pieces, and also to transact with companies who these very musicians promote or associate with. Therefore, it is evident that the ban or to put it mildly, the suspension did a lot of damage to the revenue streams of Nigerian musicians, it also whittled down their influence and stunted the growth of their brands within the period of the ban.

On the flip side, some industry watchers and experts believe that the ban had little or no negative impact on Nigerian musicians and their craft. In fact, the ban gave them an opportunity to concentrate on building their brands, work on their international acceptability and revenues on other social media and music streaming platforms which they argued, culminated into a lot of international collaborations, sold out international tours, endorsements and even award nominations and winnings. Many of them grew their subscriber base and followers on their YouTube channels, Facebook channels, Instagram which translated to more revenues from their digital contents alone; all these, without twitter!.

But the question is, why is Twitter this important especially to musicians? Well, Chris Roley (Editor of CD baby’s DIY Musician Blog) gives us three reasons why Twitter wields a considerable advantage over other social media platforms. According to Roley, there are three distinct things Twitter lets musicians do that they cannot do on other platforms:

These unique features are not present on YouTube, Instagram and to some extent, Facebook. Twitter is a converging pot of some sort. It brings every platform under one umbrella, allows for direct engagements, not just feedback, which is also not available to these musicians on most of these other platforms. In fact, a survey carried out found that most celebrities that give their social media handles out to be managed by their PR teams, mostly do not include their Twitter accounts. That says a lot!.

In conclusion, revenues accrue to musicians through the use of their music(intellectual property) by these social media platforms (Twitter inclusive) and a ban on any of them can only dwindle the revenues or even stop it entirely. It is therefore a relief to finally have Twitter back . Let the “gbas gbos” begin again! 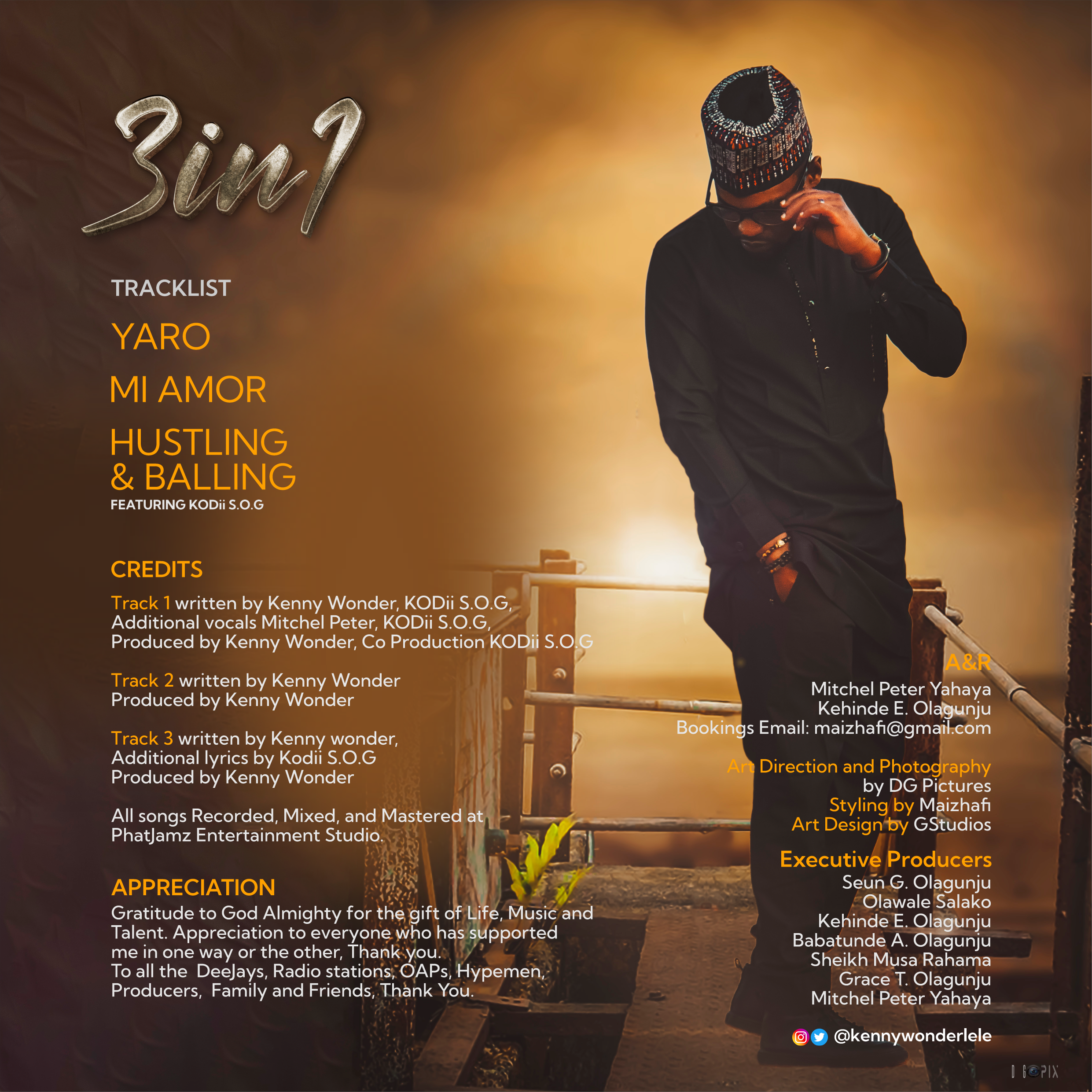 by Alewa House, published 6 months ago

Before now, content creators could only submit video requests via cloud providers to Alewa House by mail unlike for stories and album/singles. This will change starting from today, Alewa House content creators will now be able to upload and sell videos. Content moderation is still not going away anytime soon. This is because the company has a strong intellectual property protection culture.

Secondly, the updates also comes with a better designed dashboard with detailed analytics for each of content creators' digital assets. Alongside is location insight, since it is very important to know where content creators' audiences come from. 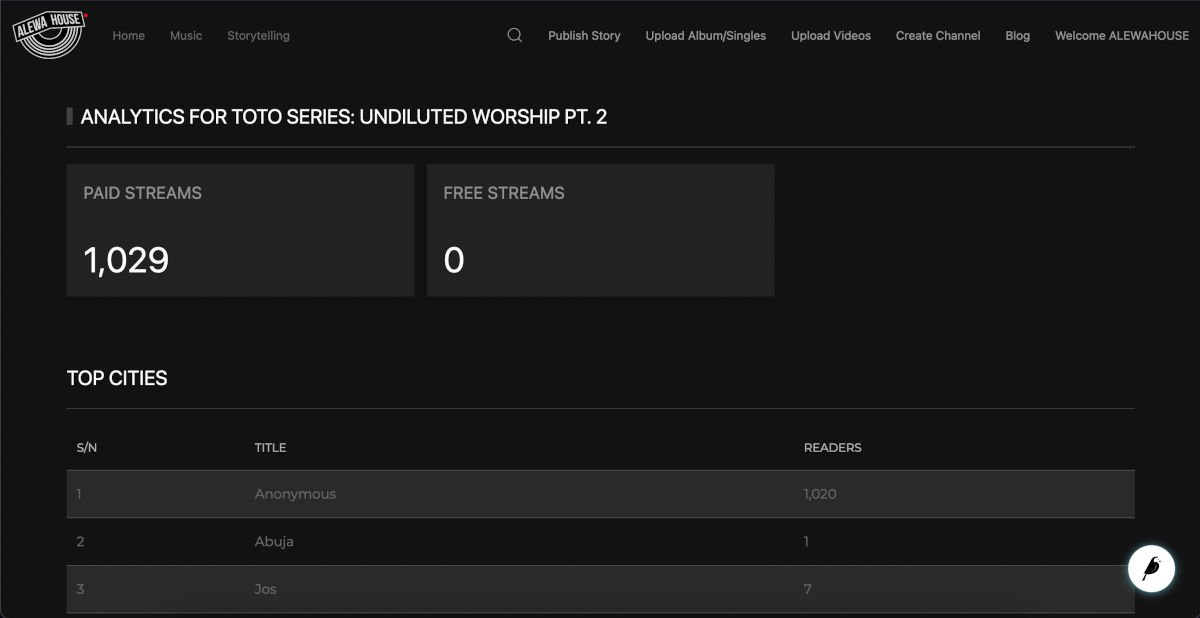 Our sole aim at Alewa House is to give power to content creators and that is why it is deliberately designed from the onset to allow Content Creators to earn from followers. The first of its kind. Right! The more followers they have, the more money they make. Here is a brief illustration from Singer and Songwriter Edge Golbador:

Spread the word to family, relatives and friends that have digital contents that would like to sell or monetize? Spread the opportunity for content creators to earn for life.